Following on from the last post, I’ve updated the visuals to something your eyes might enjoy plus added more nodes and more levels. Don’t take my word for it, load this video into your brain.

Credit Where it’s Due

Now I’ll jump straight in and say I can take very little credit for the new low poly environments and models. They’re straight from the Unity Asset Store. The Asset Store is built for quick wins like this where you can easily pull in prebuilt models to make your prototype look less….rough.

The audio is also from a favourite site https://incompetech.com. It’s a fantastic resource for backing tracks in videos to atmospheric audio for games. Thoroughly recommend.

In the last post, I discussed the concept of nodes. Nodes form the backbone of the game and make its puzzles logical. 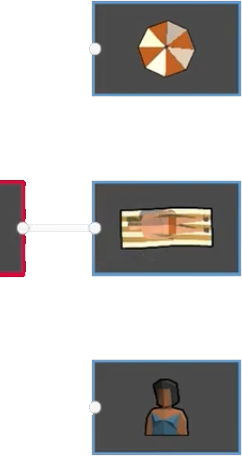 Variables (blue boxes) are used by some triggers/actions to change what is referenced/acted upon. For example, in level 3 the user changes which object to move by linking up a move node to either the umbrellas, the towels or a woman. Dependant on which variable is linked up changes which object is moved. This is only a simple example but can be used to orchestrate all sorts of brain teasers. 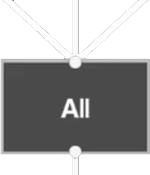 The “All” node only fires if every trigger link going into it is firing. This is used to check for multiple conditions at once, such as “All 3 lights are on” or “All players have reached their destination”

At the moment, most of the levels are simply introducing concepts. Later levels will follow to combine them and ramp up the difficulty.

I’ll update again at a later date. In the mean time, there’s more work to be done.