Last year Unity 4.6 overhauled the engines UI system making it more capable and easier to use. UI can initially seem difficult to learn but is a breeze when you know the basics. Seems like a good excuse for some tutorials. 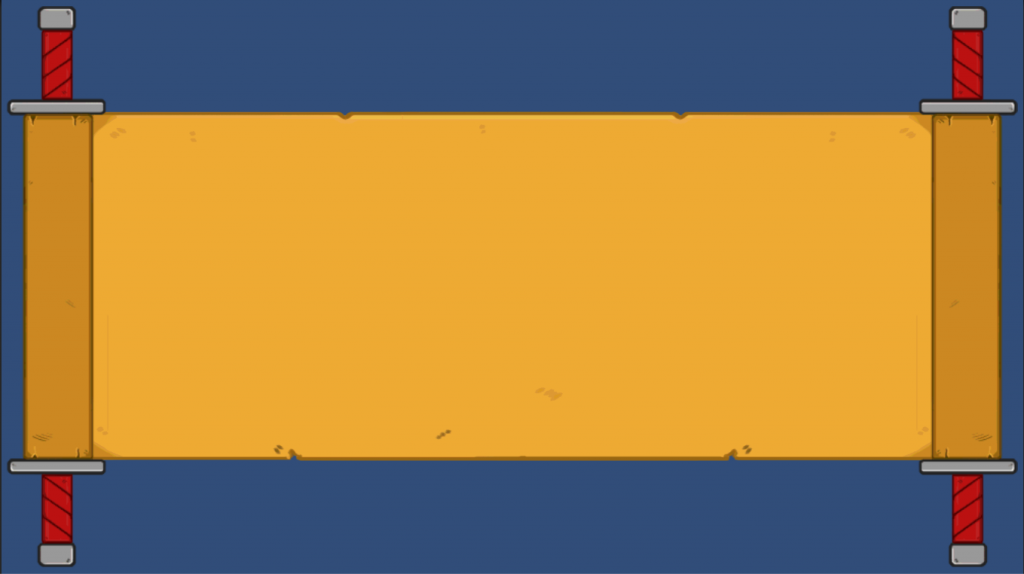 Here’s what we’ll aim for in this tutorial:

Any UI you render will sit firmly on a canvas object. A canvas can be any dimension but is normally most useful when it stretches to the full screen size. Setting a canvas to always match the screen for any device is the backbone to scaleable UI; it’s the first thing we’re going to do. 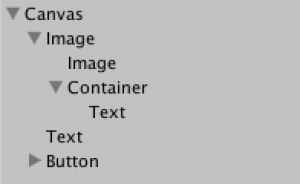 The most commonly used elements are images, text fields and buttons. Functionally they’re mostly self explanatory. In this tutorial we’ll focus mostly on the positioning and size of elements for varying screen sizes. 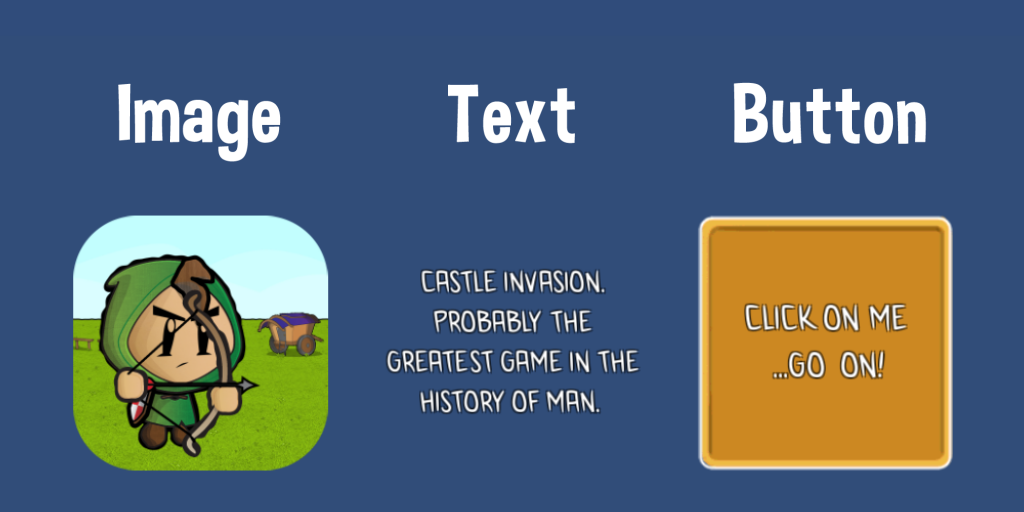 This is a UI specific component which controls position and size. RectTransform replaces the Transform component that you’ll be used to using in Unity. The important difference is in the anchor fields. These specify the left, right, top and bottom positions as a percentage of the parent size. As an example if we set the minimum X anchor to 0, our UI element would stick to the left edge of its parent object. The five fields above these control your position relative to the corresponding anchor. Changing the first field to 100 would move the left edge of your UI element 100 units away from your anchor point. 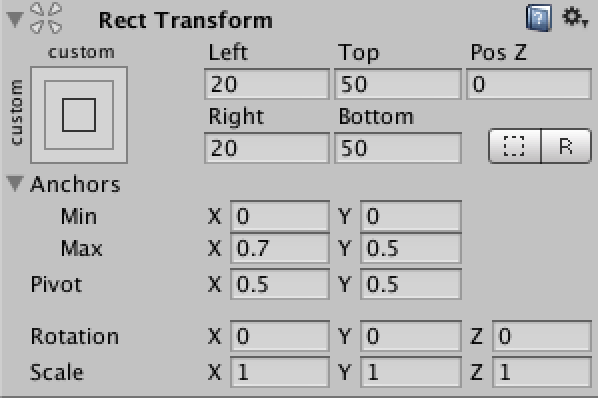 This isn’t the easiest concept to wrap your head around straight away so I’ll explain the above RectTransorm position and size:

How to use it

Now all that’s out of the way, lets begin creating something. First we’ll need to create and modify a canvas.

Creating a canvas object is easy. Add a UI element to the screen (right click in the Hierarchy then UI->Image) and a canvas will be created for you automatically. 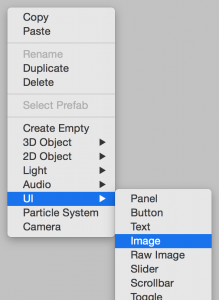 By default this creates a canvas that will move with the camera but will be a static size (not scale for different devices).

To correct this we need to tweak the canvas scaler component. Do the following:

At this point we have a canvas that will always stay in the same place, will scale with screen size and is simplified so we only have to consider screen width changes.

Now we’ll modify the image we created earlier to scale with the canvas. Click on the anchor presets button and choose the stretch horizontally and vertically option. 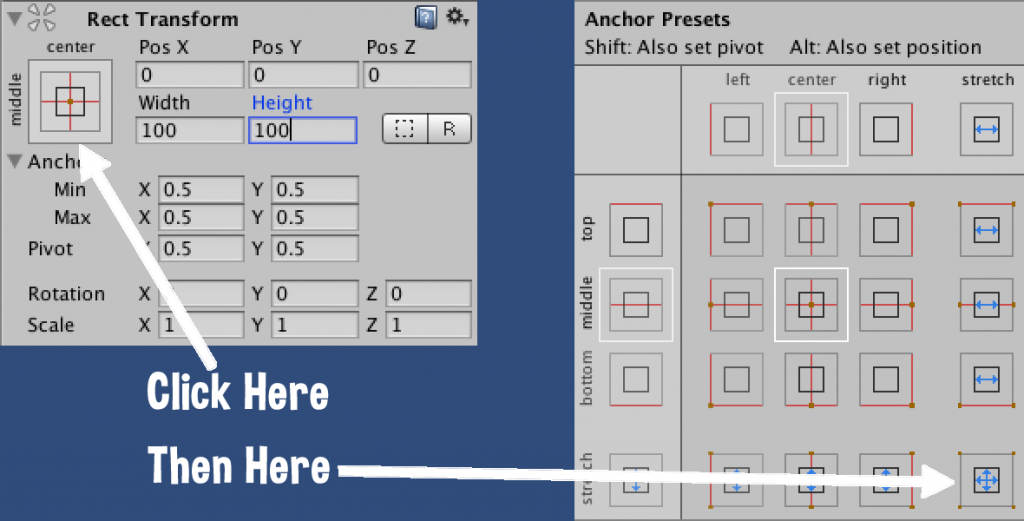 This sets the minimum X anchor to 0, the maximum X anchor to 1 and the same in the Y axis. The anchors will stick firmly to the position and size of the canvas, matching them exactly. Set the left, right, top and bottom fields to 0 so there is no distance from the anchors on any side.

First stage complete! An image that fully fills the screen on any device you can throw at it. It gets easier and faster from here on out.

This scroll looks remarkably un-scroll-like, time to fix that by adding rolled up ends to the left and right of it. I’m using an image of size 270 x 1500 for this. Create some room either side of the scroll background image we already have by changing the left, right, top and bottom values (I chose 150, 150, 300, 300).

Create a new “Image” UI component as a child of the scroll background. This will become the left scroll end. For this object we’ll need a different anchor set up. As stretching a scroll end with screen width would look daft, we want an anchoring with a constant width and height that will be anchored to the left edge of the scroll background. There is already an anchor preset for this which looks like: 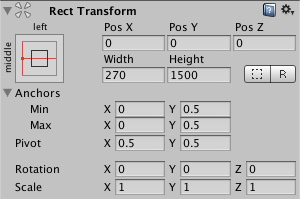 Both the min and max X anchors are firmly secured to the left edge of the parent scroll background with a value of 0. Repeat and align the second scroll end to the right to complete the scroll. 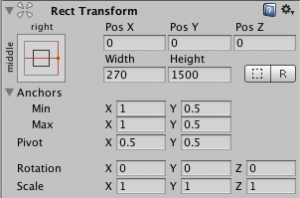 And that’s that. Taking a look at how this simplistic set up scales, it works just as you’d hope. A background image that fills as much space as it can and 2 rolled up scroll ends that always stay the same size and are glued to the left and right extremes of the screen.

Hope you’ve enjoyed that soft introduction into Unity UI. If there’s anything you’d like to see more or less of in a future tutorial drop me a comment below.